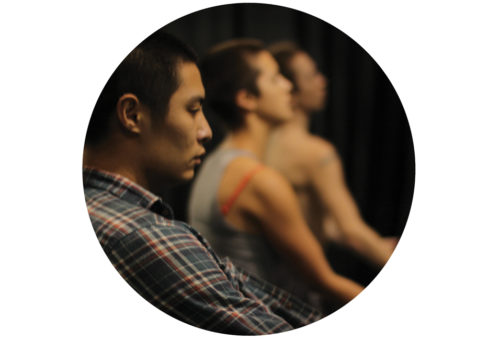 Rhiannon Newton is a Sydney based dancer and choreographer. Her practice concentrates on the relationship between the live-ness of dance and processes of repetition, problematising how a dancing spirit meets economies of production and authorship.

Her works have been presented at the Judson Church (USA), Dancehouse, Nagib On Stage (SL), Brisbane Festival, Metro Arts, Strut Dance and the PACT Centre for Emerging Artists. She has developed her practice in artist residencies throughout Australia, Europe and the USA, including Critical Path, Bundanon Trust, FORM Dance Projects, Movement Research (USA) and Tanzhaus Zurich (CH), among others. She has been a part of international forums such as the Australian Eastern European Choreographic Exchange (2013), the Avignon Festival Seminar and the Swiss Australian Reciprocal Residency Program (2016).

Rhiannon works as performer in rigorous, experimental and community-focused projects. Recently she has worked with Rosalind Crisp, Martin Del Amo for the Sydney Festival, Mette Edvardsen (NOR/BE) for the 20th Biennale of Sydney, Agatha Goethe-Snape and Brooke Stamp for the 20th Biennale of Sydney, Paea Leach for the Kier Choreographic Award and Adelle Mills for Primavera (Museum of Contemporary Arts).