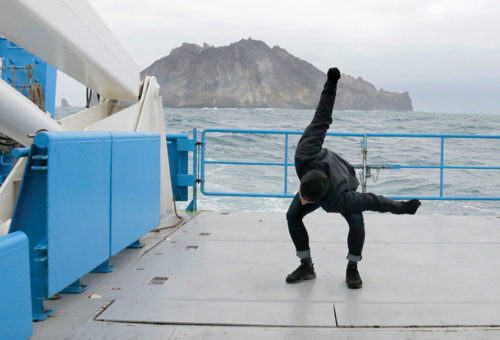 James Batchelor is a performer, choreographer and filmmaker from Canberra. His works combine movement and visual arts, using performance as a tool to inspire critical thought and reflection on the contemporary world. As a freelance performer, James has worked with some of Australia’s most renowned companies and independent artists such as Chunky Move (Aorta and It Sounds Silly), Tasdance (Luminous Flux), Sue Healey (Inevitable Scenarios), Antony Hamilton (Black Project 2) and Prue Lang (Spaceproject).

Dancing since the age of five, James trained with Quantum Leap in Canberra before moving to Melbourne to complete a Bachelor of Dance at the Victorian College of the Arts. While studying he was the recipient of various awards and scholarships including the Joy Nicholls scholarship, Dr Phillip Law Travel scholarship, Lionel Gell scholarship and the Friends of VCA Award. He was also awarded Canberra Young Citizen of the Year in the Arts. Upon graduating he was awarded the prestigious VCA Graduate Mentors Scholarship and an Australia Council Artstart grant to establish his choreographic practice.

Among Batchelor’s early works was ERSATZ a performance installation and film series involving collaborations with international environmental and digital media artists. The series began with a collaborative development at the Chamarande Arts Centre in France and an open-ended residency in Brighton working with environmental artist Simon Pascoe. Originally commissioned as a performance by the Canberra You are Here Festival, ERSATZ was presented at the Canberra Museum and Gallery, Blindside Gallery, Revolt Artspace, PAVE Festival and was presented by the Australian Embassy in Bangkok at Paragon Infinicity Hall. ERSATZ was also programmed as a performance installation for the Canberra Museum and Gallery’s major summer exhibition program in 2014-15 PULSE.

In 2014 he was selected as the Dancehouse Housemate Resident, for which he developed ISLAND a performance work combining dance, sound and architecture. He also gained support from Arts ACT to present ISLAND at the Canberra Theatre in May 2014. Both seasons were received with critical acclaim. ISLAND won a Green Room Award for Concept and Realisation and a Canberra Critics Circle Award. It was also nominated for an Australian Dance Award for Outstanding Achievement in Independent Dance.

In 2014 James was also commissioned to make a new work for the inaugural Keir Choreographic Award. He developed a short work ESCAPE TO THE INFINITE, which has now expanded into a major performance series called METASYSTEMS. In 2015, James was successful in gaining supported from Arts ACT, City of Melbourne and the Department of Foreign Affairs and Trade to develop 3 more works in the METASYSTEMS series. The work has been presented at the Canberra Theatre Centre, Summersalt Festival Melbourne, Fortyfivedownstairs Melbourne and Creative Industries in Bangkok. METASYSTEMS tours to Bassano Del Grappa as part of the Operaestate Festival, Paris at La Biqueterie Centre Choreographique and Chongqing at 501 Artspace.

James has also been involved in various youth and community programs. In 2014 he was commissioned to make a new work CINDERS on the Quantum Leap Youth Dance Ensemble in Canberra which also toured to Bangkok and Glasgow. In 2015 he was again asked to make a work for the Quantum Leap Ensemble, ROAD TO NOWHERE as part of the RECKLESS VALOUR project. In 2014 James led a ten-week project in Melbourne as part of the Rotary Youth Arts Program, which was about giving disadvantaged youth in the community a voice through movement and artistic endeavors. James has also led workshops and master classes in Australia and Thailand on various occasions.